Sri Sadhu Ram Chaurasia s/o Late Sri Ram Kewal Chaurasia, living in village Malethu Bujurg, Block Haringtonganj of Ayodhya district (UP) was planning to cultivate a crop which gives some remunerative than the prevailing rice-wheat cropping system, but he was totally clueless on what to cultivate. Rice-wheat cropping system did not give much benefit to feed his family member. Another problem was the soil. The soil of the block Haringtonganj is saline and sodic soils, which provide very less productivity to various field crops. Being a young aged farmer, he along with same aged group friends visited Krishi Vigyan Kendra Masodha, Faizabad and discussed with the scientists about their problems and request them to provide other alternative of the prevailing cropping system. Krishi Vigyan Kendra after assessing their problems and need provided a platform with various research scientists engaged in the diversification at the premises to sort out their problems during April, 2010. Sri Chaurasia met with Dr. Vikrama Prasad Pandey, Associate Professor, Dept. of Vegetable Science, College of Horticulture & Agro forestry, N.D.U.A. & T., Kumarganj, Faizabad (UP) during the meeting and after discussion it was realized that seed spices and turmeric crop may be the solution of his problem.

Initially, the seed rhizomes of turmeric var. NDH 1 of half quintal provided to him through on farm trial programme of KVK, so that a trust must be developed within him and in the other villagers. Assessment of variety was also done with the programme. He yielded from half quintal seed to 10 quintals of raw turmeric. He dried about 05 quintals of turmeric and powdered it for domestic use to himself and other villagers of his village so that quality of turmeric powder can be judge out. A warm response of quality of turmeric powder and superiority with other powders prevailed in the market was obtained. Now he convinced that this cultivar of turmeric gave the better profit after commercialization. 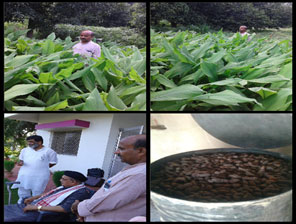 Thereafter, he continuously grew turmeric in 0.5 ha area and commercialized the products with the help of local market along with the selling of seed rhizome. With 0.5 ha area he earned a profit of Rs. 50,000/- every year with the cultivation of turmeric crop. From last three years (2012-13) he also harvested turmeric oil from its leaves and provided to nearby villagers with a remunerable rates. He now earned extra Rs. 15,000/- every year with the oil of turmeric crop.

Maturing in 230 days under irrigated conditions, NDH 1 gave an average yield of 25-28 tonnes per hectare with a dry recovery of 17.8 per cent. Relatively higher levels of curcumin (4.25%), oleoresin (10.6%) and essential oil (5.5%) make NDH 1 a hottest choice for industrial, medicinal and culinary purposes. This high curcumin variety of turmeric was developed by N.D.U.A. & T. Kumarganj.

Regarding the future course of action, Sri Chaurasia has well thought out plans. He strongly feels that NDH 1 turmeric powder and oil should be marketed in the household as a unique branded product, owing to its better culinary properties. Current year he started to establish a processing plant for the processing of turmeric. 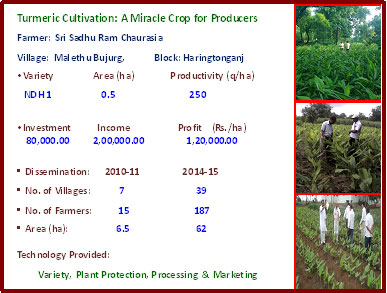 It was suggested that , rice- vegetable pea – wheat system was distinctly better than exiting rice- wheat with productivity of 52.3 kg/ha/ day as rice equivalent grain yield and profitability of Rs.202.8 /ha /day followed by rice – potato- wheat with productivity of 45.5 kg/ha/day and profitability of Rs.136.0 /ha/day. For Long term sustained productivity and economic gains rice – vegetable pea-wheat- green gram every year and rice- mustard- green gram once in three years followed by rice- wheat –green gram were equally good giving the respective land use efficiency of 98.1 % and 92.0%, irrigation water use productivity of 143.6 and 155.3 and nutrient use productivity of 23.8 and 27.8 kg grain/kg nutrient use as compared to the existing rice wheat system which was inferior in all aspects.

Strategy: Both long and short term strategies worked out considering the present trends and future perspectives of globalization of economy with new trade opportunities, no fixed system was expected to sustain in the years to come. Therefore, diverse system dynamic in nature and capable to absorb change were desirable, were prepared.

The progressive farmers which were interested in crop diversification, crop rotation mainly in vegetable and horticulture cultivation were selected. They were given training on seed production of various vegetables and horticulture crops.

4.   Technology and innovation adopted: Scientists helped in selection of new technologies, new variety and their cultivation.

6.  Contributing factors: My husband Sri Sant Ram, son-Sri Shobha Ram and daughter in-law Smt. Saroj Rawat help in cultivation and marketing of crops. The scientists of Krishi Vigyan Kendra, Masodha, Ayodhya provide me all the technical and scientific knowledge along with seed, pesticides and marketing skills.

8. Importance for other farmers: All the farmers of village- Maglasi, Pure Ram deen, Juber Ganj started mixed vegetable and Banana farming and getting profit for improvement of their economic status. 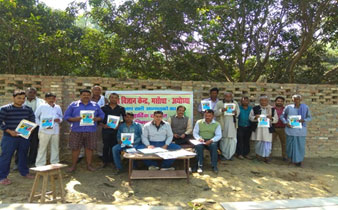 Situation analysis/ Problem statements:- Mr. Umanath Shukla, village: Bansgoan, Post: Amaniganj block: Amaniganj, district: Ayodhya, a farmer who was selected for this demonstration. He was earlier involved with local variety of Chickpea Udai. These varieties were low in yield

Plan, Implement and Support:- KVK Ayodhya tries to make them aware regarding scientific cultivation of Chickpea. That starts from land preparation to harvesting. This KVK has encouraged the farmer for soil testing and on the basis of that farmer was advised for balanced dose of chemical fertilizer with high yielding varieties Joki-9218. That was sown on 01-11-2018 with line sowing and fertilizer application was done with basal application in which full dose of nitrogen, full dose of SSP and full dose of MOP as recommended.

Outcome:- Chickpea crop is the major pulse crop of the district. KVK Ayodhya conducted 25 demonstrations in 1 villages during 2018-19 in an area of 10 ha at farmers’ field with using Joki-9218 and balanced dose of chemical fertilizer (N:P:K:S::20:60:30:30) kg/ha. The outcome of this demonstration motivated the farming communities to replace their old varieties, non-descriptive varieties. Mr. Umanath Shukla is very happy on improvement in their income, livelihood and set forth example for others.

Impact:- Mr. Umanath Shukla is becoming one of the progressive and learned farmers for others with regards to popularization of Joki-9218. This technology helps him for livelihood, empowerment and make him enthusiastic regards pulses production. He is one of the progressive farmer after a becoming a part of KVK activities and get their effectiveness for his own development. Mr. Umanath Shukla is very happy with this improved production and management technology and set forth example for other farmers of the district.